EASA CERTIFICATION OF ROTAX 915 ISC3 A AIRCRAFT ENGINE IN TIME 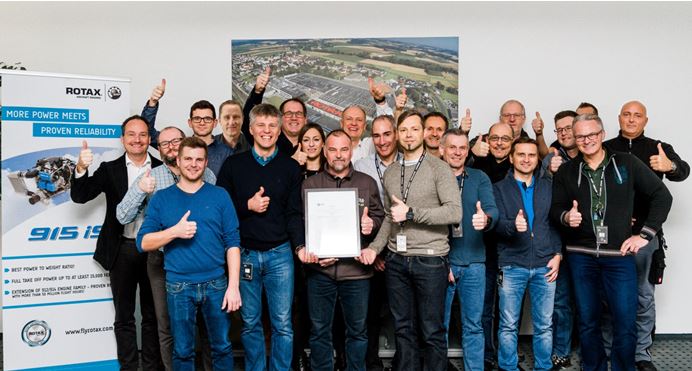 “The EASA Type Certificate allows BRP-Rotax to now produce the certified 915 iSc3 A engine for the European market thus allowing us to fulfill the request of our customers for a more powerful Rotax aircraft engine with proven reliability,” said Thomas Uhr, general manager, BRP-Rotax, vice president Powertrain BRP and R&D / Operations Lynx. “Not only has the certification been achieved within the promised time schedule but the engine has been certified to even higher power than originally announced. Instead of 100kW (136hp) maximum power the engine will offer 104kW (141hp) maximum power instead and 99kW (135hp) maximum continuous power. Once more we will provide the ultimate flight experience to pilots.”

The EASA promotes the highest standards of safety and environmental protection in civil aviation in Europe and worldwide. After the EASA Type Certification, BRP's Rotax aircraft engines team will concentrate on getting the U.S. Federal Aviation Administration (FAA) certification. Other countries will follow as each has its own validation process.

The increased power of 104kW is available up to at least 15,000 ft (4,572m) making the Rotax 915 iSc3 A engine the perfect package for all fixed wings, gyrocopter and further applications; it will also offer the possibility to carry up to 4 persons already in single engine application. Based on the proven concept of the Rotax 912 / 914 engine series, Rotax is again offering the best power to weight ratio of its class combined with the best economy while allowing for a high flexibility on the usable fuels. It delivers the most advanced aircraft engine technology resulting in low operating cost and ease of use.

Up to this date already 12 OEMs (amongst them Tecnam, BRM Aero, NIKI Rotor Aviation, BlackWing, Zlin Aviation) have integrated the engine and will make their aircraft available very soon. Additional 47 OEMs are also already in the final stages of the integration of this engine.

About BRP-Rotax
BRP-Rotax GmbH & Co KG, a subsidiary of BRP Inc., located in Gunskirchen, Austria is a leader in the development and production of innovative 4- and 2-stroke high performance Rotax engines for BRP products such as Ski-Doo and Lynx snowmobiles, Sea-Doo watercraft, Can-Am all-terrain, side-by-side vehicles and Can-Am Spyder lineup as well for motorcycles, karts, ultra-light and light aircraft. In the last 50 years, the company has developed more than 350 engine models for recreational vehicles and produced over 7 million engines.
www.rotax.com
www.flyrotax.com

About BRP
BRP (TSX:DOO) is a global leader in the design, development, manufacturing, distribution and marketing of powersports vehicles and propulsion systems. Its portfolio includes Ski-Doo and Lynx snowmobiles, Sea-Doo watercraft, Can-Am off-road and Spyder vehicles, Evinrude and Rotax marine propulsion systems as well as Rotax engines for karts, motorcycles and recreational aircraft. BRP supports its line of products with a dedicated parts, accessories and clothing business. With annual sales of CA$4.2 billion from over 100 countries, the Company employs approximately 8,700 people worldwide.
www.brp.com
@BRPnews