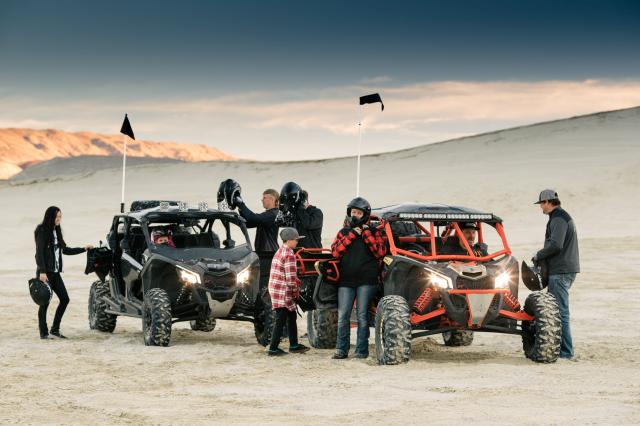 Highlights for the quarter vs Q4 FY2016:

Highlights for the year vs FY2016:

Valcourt, Québec, March 24, 2017 – BRP Inc. (TSX:DOO) today reported its financial results for the three- and twelve-month periods ended January 31, 2017. All financial information is in Canadian dollars unless otherwise noted. The complete financial results are available at www.sedar.com, as well as in the Quarterly Reports section of BRP's website.

"The fourth quarter has always been the busiest of the year, in terms of sales and shipments, and our execution was flawless. We are seeing great momentum with the retail sales of Can-Am Defender and Maverick X3 side-by-side vehicles and Sea-Doo watercraft, which have contributed to this year's great results," said José Boisjoli, president and CEO. "And while the Can-Am Maverick X3 model was only recently introduced to the market, the consumer and dealer response has been extremely positive."

"We have completed a record quarter and a record year in difficult market conditions, and I firmly believe that our success is largely due to the quality of our team, and the diversification of our product offering, geographic sales and manufacturing footprint," Boisjoli added. "I am very proud of the BRP team for the excellence of its work, and I remain convinced that our focus on our strategic priorities is key to achieving our objectives and delivering our FY18 guidance."

Highlights for the Three- and Twelve-Month Periods Ended January 31, 2017

Revenues increased by $196.5 million, or 17.7%, to $1,305.3 million for the three-month period ended January 31, 2017, compared with $1,108.8 million for the corresponding period ended January 31, 2016. The revenue increase was mainly due to higher wholesale in Seasonal Products and Year-Round Products, partially offset by an unfavourable foreign exchange rate variation of $48 million related largely to the decrease of the U.S. dollar and the euro against the Canadian dollar.

Revenues increased by $342.3 million, or 8.9%, to $4,171.5 million for the twelve-month period ended January 31, 2017, compared with $3,829.2 million for the corresponding period ended January 31, 2016. The revenue increase was primarily attributable to higher wholesale of Year-Round Products and Seasonal Products and a favourable foreign exchange rate variation of $12 million mainly due to the strengthening of the U.S. dollar against the Canadian dollar.

Revenues from Year-Round Products increased by $44.7 million, or 9.3%, to $527.3 million for the three-month period ended January 31, 2017, compared with $482.6 million for the corresponding period ended January 31, 2016. The increase resulted from a higher volume and a favourable product mix of SSV sold following the introduction of the Can-Am Maverick X3 and Defender models. The increase was partially offset by lower wholesale in Can-Am Spyder vehicles and an unfavourable foreign exchange rate variation of $27 million.

Revenues from Seasonal Products increased by $132.8 million, or 37.2%, to $489.5 million for the three-month period ended January 31, 2017, compared with $356.7 million for the corresponding period ended January 31, 2016. The increase resulted primarily from snowmobile due to a higher volume mainly attributable to later shipments this year and to a favourable mix. The increase was partially offset by an unfavourable foreign exchange rate variation of $13 million.

Revenues from Propulsion Systems increased by $12.5 million, or 12.6%, to $111.5 million for the three-month period ended January 31, 2017, compared with $99.0 million for the corresponding period ended January 31, 2016. The increase in revenues was mainly attributable to a higher volume of motorcycle engines sold and a favourable mix of outboard engines sold. The increase was partially offset by an unfavourable foreign exchange rate variation of $4 million.

Revenues from PAC increased by $6.5 million, or 3.8%, to $177.0 million for the three-month period ended January 31, 2017, compared with $170.5 million for the corresponding period ended January 31, 2016. The increase was mainly attributable to a higher volume of SSV PAC sold following the introduction of the Can-Am Maverick X3 and to a higher volume of snowmobile PAC sold. The increase was partially offset by an unfavourable foreign exchange rate variation of $4 million.

Operating expenses decreased by $42.4 million, or 20.1%, to $168.2 million for the three-month period ended January 31, 2017, compared with $210.6 million for the three-month period ended January 31, 2016. This decrease was mainly due to a non-cash impairment charge of $70.3 million recorded last year related to the outboard engines cash generating unit. The decrease was partially offset by higher selling and marketing and general and administrative expenses for continued product investments.

The table below sets forth BRP's financial guidance for Fiscal Year 2018 when compared to actual results for Fiscal Year 2017. The individual targets are based on certain assumptions for currency exchange rates and exclude the effects of future fluctuations.

The above targets are based on a number of economic and market assumptions the Company has made in preparing its Fiscal Year 2018 financial guidance, including assumptions regarding the performance of the economies in which it operates, foreign exchange currency fluctuations, market competition and tax laws applicable to its operations. The Company cautions that the assumptions used to prepare the forecasts for Fiscal Year 2018, although reasonable at the time they were made, may prove to be incorrect or inaccurate. In addition, the above forecasts do not reflect the potential impact of any non-recurring or other special items or of any new material commercial agreements, dispositions, mergers, acquisitions, other business combinations or other transactions that may be announced or that may occur after March 23, 2017. The financial impact of such transactions and non-recurring and other special items can be complex and depends on the facts particular to each of them. We therefore cannot describe the expected impact in a meaningful way or in the same way we present known risks affecting our business. Accordingly, our actual results could differ materially from our expectations as set forth in this news release. The outlook provided constitutes forward-looking statements within the meaning of applicable securities laws and should be read in conjunction with the "Caution Concerning Forward-Looking Statements" section.

Today at 9 a.m. (ET), BRP Inc. will host a conference call and webcast to discuss BRP's FY2017 fourth-quarter and year-end results released this morning. The call will be hosted by José Boisjoli, president and CEO, and Sébastien Martel, CFO. To listen to the English-only conference call by phone (event number 4260664), please dial 416-340-2217 or 800-806-5484 (toll-free in North America). Click for international dial-in numbers.

The Company's fourth-quarter and year-end FY2017 MD&A, financial statements and webcast presentation are posted in the Quarterly Reports section of BRP's website, while its Annual Information Form can be found in the Annual Reports section. To listen to an instant replay of the call, please dial 514-861-2272 or 800-408-3053, and enter the pass code 4221718.

BRP (TSX:DOO) is a global leader in the design, development, manufacturing, distribution and marketing of powersports vehicles and propulsion systems. Its portfolio includes Ski-Doo and Lynx snowmobiles, Sea-Doo watercraft, Can-Am off-road and Spyder vehicles, Evinrude and Rotax marine propulsion systems as well as Rotax engines for karts, motorcycles and recreational aircraft. BRP supports its line of products with a dedicated parts, accessories and clothing business. With annual sales of CA$4.2 billion from over 100 countries, the Company employs approximately 8,700 people worldwide.

Ski-Doo, Lynx, Sea-Doo, Evinrude, Rotax, Can-Am, Spyder, Defender, Maverick, X3 and the BRP logo are trademarks of Bombardier Recreational Products Inc. or its affiliates. All other trademarks are the property of their respective owners.

Certain information included in this release, including, but not limited to, statements relating to our Fiscal Year 2018 financial outlook (including revenues, gross profit margin, operating expenses, Normalized EBITDA, Effective Tax Rate, Normalized net income and Normalized earnings per share), and other statements that are not historical facts, are "forward-looking statements" within the meaning of Canadian securities laws. Forward-looking statements are typically identified by the use of terminology such as "may", "will", "would", "should", "could", "expects", "forecasts", "plans", "intends", "trends", "indications", "anticipates", "believes", "estimates", "outlook", "predicts", "projects", "likely" or "potential" or the negative or other variations of these words or other comparable words or phrases. Forward looking statements, by their very nature, involve inherent risks and uncertainties and are based on several assumptions, both general and specific. BRP cautions that its assumptions may not materialize and that current economic conditions render such assumptions, although reasonable at the time they were made, subject to greater uncertainty. Such forward-looking statements are not guarantees of future performance and involve known and unknown risks, uncertainties and other factors which may cause the actual results or performance of the Company or the powersports industry to be materially different from the outlook or any future results or performance implied by such statements. Key assumptions used in determining forward-looking information are set forth below.

The Company made a number of economic and market assumptions in preparing its Fiscal Year 2018 financial guidance, including assumptions regarding the performance of the economies in which it operates, market competition, tax laws applicable to its operations and foreign exchange currency fluctuation. In addition, many factors could cause the Company's actual results, level of activity, performance or achievements or future events or developments to differ materially from those expressed or implied by the forward-looking statements, including, without limitation, the following factors, which are discussed in greater detail under the heading "Risk Factors" of its Annual Information Form: impact of adverse economic conditions on consumer spending; decline in social acceptability of the Company's products; fluctuations in foreign currency exchange rates; high levels of indebtedness; unavailability of additional capital; unfavourable weather conditions; seasonal sales fluctuations; inability to comply with product safety, health, environmental and noise pollution laws; large fixed cost base; inability of dealers and distributors to secure adequate access to capital; supply problems, termination or interruption of supply arrangements or increases in the cost of materials; competition in product lines; inability to successfully execute growth strategy; international sales and operations; failure of information technology systems or security breach; loss of members of management team or employees who possess specialized market knowledge and technical skills; inability to maintain and enhance reputation and brands; significant product liability claim; significant product repair and/or replacement due to product warranty claims or product recalls; reliance on a network of independent dealers and distributors; inability to successfully manage inventory levels; intellectual property infringement and litigation; inability to successfully execute manufacturing strategy; covenants in financing and other material agreements; changes in tax laws and unanticipated tax liabilities; deterioration in relationships with employees; pension plan liabilities; natural disasters; failure to carry proper insurance coverage; volatile market price for BRP's subordinate voting shares; conduct of business through subsidiaries; significant influence by Beaudier Inc. and 4338618 Canada Inc. (together the "Beaudier Group") and Bain Capital Luxembourg Investments S. à r. l. ("Bain Capital"); and future sales of BRP's shares by Beaudier Group, Bain Capital, directors, officers or senior management of the Company. These factors are not intended to represent a complete list of the factors that could affect the Company; however, these factors should be considered carefully.

This press release makes reference to certain non-IFRS measures. These measures are not recognized measures under IFRS, do not have a standardized meaning prescribed by IFRS and are therefore unlikely to be comparable to similar measures presented by other companies. Rather, these measures are provided as additional information to complement those IFRS measures by providing further understanding of the Company's results of operations from management's perspective. Accordingly, they should not be considered in isolation nor as a substitute for analysis of the Company's financial information reported under IFRS. The Company uses non-IFRS measures including Normalized EBITDA, Normalized Net Income, Normalized basic earnings per share and Normalized diluted earnings per share.

For a high-resolution image, please access the BRP Media Centre and sign in with the following credentials: